Specifically for the fans who love the competition outfit, it is the match that the pupils of coach Maurizio Sarri officially launched a new outfit from the cooperation between adidas and Palace Skateboards.

Before the match between Juventus and Genoa took place, a lot of rumors about Juventus will wear entirely new white outfits with adidas and Palace logos tingling throughout the Italian football forums. The BLD Juventus also asked the team to “throw in” until the end.

Stepping down from the car, Ronaldo and his teammates wore a white tracksuit dotted with unique neon green streaks. By the time the team removed the tracksuit shirt to practice boot, all the rumors were cleared.

The home outfit of Juventus is “customized” with more details that make fans think of the shirts from the 90s of the last century but no less personality, a trend that is predicted to be “extremely hot”. in 2020. 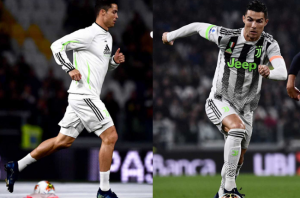 The neon green streaks make up the accent on the team logo, arms, team name, shirt number and adidas x Palace logo. Besides, the black stripes on shirts and socks are stylized by graphic style “deformed” extremely impressive.

The partnership with Palace Skateboards is an important step for adidas to become “a leading lifestyle brand,” and to have competitive strategies, especially when Nike has just created should be successful with cooperation with Jordan and PSG.

For Palace Skateboards, partnering with Nike is the first step into the world of professional football. More than a year ago, Palace was very successful with the collection of costumes to compete at Wimbledon 2018.

As planned, in addition to competition, the adidas x Palace collection of hats, scarves and other accessories will officially be launched in the next few days.