As the brand associated with the legendary Michael Jordan, Jumpman launched the collection with many unique shoes to pay tribute to the land of Chicago, which has created one of the greatest basketball players in history. Let’s check out!

The world has entered a new decade and with the NBA, these 10 years will begin with the 2020 NBA All-Star festival taking place in Chicago. 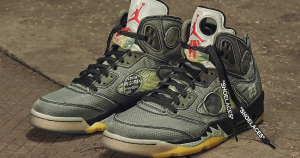 As the land of basketball legend Michael Jordan and a powerful Chicago Bulls of the 1990s, “Windy City” has many traditional values ​​and is also an endless source of inspiration that Jordan Brand cannot ignore.

Just before All-Star Weekend kicks off in 3 weeks, Nike’s sub-brand has officially launched a collection dedicated to NBA All-Star 2020 including 12 different shoe models. In particular, many couples have huge historical value.

It is believed by many sources that this is one of the shoes with very difficult material to “process”, but this clearly did not prevent the imagination and creative brain at the genius level of the designer. Virgil Abloh.

After months of speculation with occasional images that have surfaced online, the classic version of the legendary Air Jordan 1 shoe has officially been released. This time, buyers will be back in 1985 with the shape, material selection and classic bold color scheme called “New Beginnings”.

Back in the 1980s, Jordan Brand brought to the world in 2020 a version of the Nike Air Ship in its original form.

This is the shoe model that has been banned by the NBA because of the illegal color scheme that Michael Jordan used in the past. This is really a very historic shoe with the Jordan Brand brand, maybe bigger than everyone’s imagination.